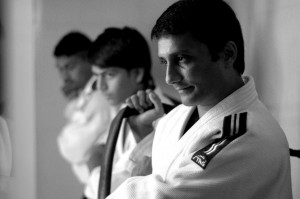 United Judo Academy was formed in the year 1992 by Sensei Suresh Kanojia. UJO was formerly known as Dynamic stars of Judo. It was renamed as United Judo Academy for it deep meaning. Since our beginning, we have trained more than 7000 students from various age groups, for example: 3 year old toddlers to 70 yrs old senior citizens. Our students include boys and girls, employees, professionals, mothers, housewives, businessmen and people from corporate background.

United Judo Academy was started at Our Lady of Nazareth High School with 50 students. Currently UJA has two centers at Andheri west & training centers in many schools across Mumbai.

UJA’s students with competitive potential, participate and perform at District, State, National and even International level Judo tournaments. They have won many medals and received most promising athletic titles.

Many of our students have become National level referees and judges. Many others come and learn Judo just for fun and fitness as there is lots of fun in learning Judo because we use theories of science (Physics), calculations along with geometrical mathematics in the learning process.

The United Judo Academy has also hosted many Judo events of District and State levels at various schools and colleges. As these events get covered in many newspapers and TV commercials, the schools and the colleges associated with us gain good amount of good will.

1. We teach values of life to the children.

2. We are a traditional institute where maintaining the bond between student, their fellow mates and the teachers is our high priority.

3. We help build sportsmanship in our students which raises their self confidence.

Our Institute have adopted few under privileged children to teach them Judo Free of Cost and tries to channelize their unused energy into a right direction and makes a sportsman out of them so that they can be absorbed for the Job  by the  Central and  State Government of India.